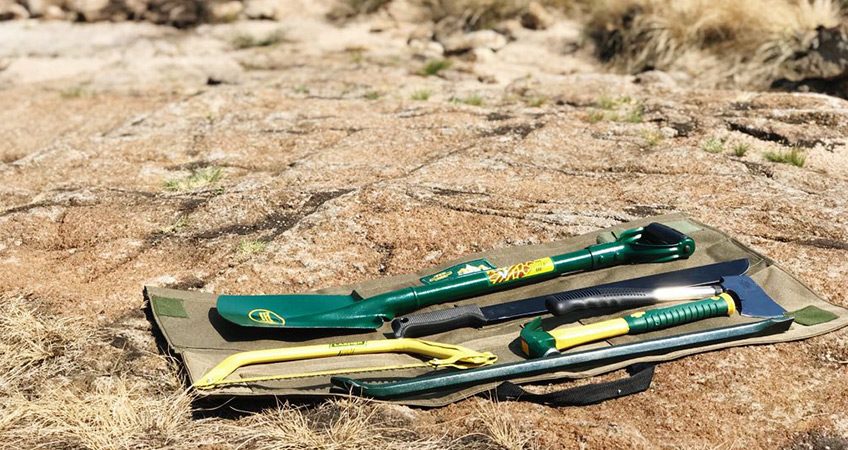 4x4ing is more than just a hobby, it’s a way of life. That exhilarating freedom, the rustic magic of sand, water and rocks is a definite stress reliever in the craziness of this 21st century world.

I recently went on a 4×4 trail in Piesangskloof just an hour away from Lanseria Airport. Piesangskloof is situated at the foothills of Magaliesberg, near Hartbeespoort and is an un-spoilt nature area where off-roaders can test their 4×4 skills. I found myself surrounded by beautiful mountains and rugged terrain overlooking the Hartebeesport dam. The scenery was majestic and definitely ideal conditions for the 4×4! Piesangskloof also had an awesome self-help braai facility making it the ultimate location to test out our Lasher 4×4/camping kit. The kit contained six must-have items:

Made with a tempered, hardened steel shaft, metal hilt and coated in green epoxy for increased durability.

It’s first and most obvious use was made quickly apparent in the muddy post-highveld-thunderstorm soil. The 4×4 quickly became stuck. The more I tried to get out of the mud the quicker she seemed to get stuck. Luckily, we had the camping spade as part of our kit and she was dug out and un-stuck in no time.

When we settled down for the night this spade also came in handy to dig a rain trench around my tent and dig up any rocks in my tents footprint. There’s nothing worse than a lumpy tent floor. We also used the spade to dig a fire pit for our camp fire. Perhaps the camping spade’s most unique use was when “nature called” and I was able to use the spade to dig a hole and get down to business.

Made from tempered carbon steel with a polypropylene handle moulded directly on to the blade.

After setting up camp for the night, and collecting tinder and small firewood using the machete, we got to the task of making food. Come morning, we decided to take a mini hike. Here’s where the Lasher Latin machete truly shone, able to cut through any dense bush or branches of thorn trees obstructing our path.

Made from finest quality carbon steel with its cutting edge hardened and tempered for durability.

Cutting fire wood, logs. This axe’s grip was so comfortable and shock absorbing I definitely noticed the difference when chopping logs for fire wood. There nothing quite like sitting at a campfire, eating and swopping stories with your boys. This is the true magic of camping.

Made with an epoxy coated frame with a bow and hacksaw blade attached for easy wood and steel cutting.

This saw was awesome! Its lightweight design and easy grip making quick work of cutting branches to use as firewood or branches encroaching on our campsite that could cause someone injury in the dark. This saw also came in handy when the 4×4 got stuck. I was able to cut a few pieces of logs and place them in front and under the wheels to create a makeshift ramp and give my wheels some traction.

Made with hardened tempered steel and a green epoxy coating to increase durability.

Our Lasher crowbar came in handy when moving heavy objects like rocks out of the way of the 4×4 as well as digging into harder ground. The hardened tapered edge of the crowbar also came in handy to chip away at rocks that became stuck under the 4×4. Things like putting the pegs of our tent into the hard ground was also made easier by this versatile tool, allowing us to break through the hard ground before hammering in our pegs.

Made with an unbreakable steel core with polypropylene handle and PVC grip for comfort.

Besides the above-mentioned use of our suregrip hammer to hammer in pegs, it can also be used to loosen your tyre by tapping around the exterior when changing a tyre. When you’re an avid off-roader, chances are you’re going to need to change your tyres at least once on the go.

The Lasher 4×4/Camping Kit really is a versatile set of tools containing everything an avid off-roader and camper would need. DIY Dave approved!